Imagine this scenario. You’re having an argument (I know, I know, none of us ever argue, but just…humor me for a moment). For the sake of the story, we’ll say it’s an argument with a spouse. As tensions and voices rise, you can feel a visceral response in your body. Your shoulders tense. A knot grows in your stomach. You can feel the heat rising inside, automatically putting you on the defensive. Your partner’s voice becomes nothing but noise, and finally s/he yells, “You’re not listening!!” You feel bad. You were listening, you just weren’t, well, listening.

What does this have to do with interpretation, you ask? Well, if you’ve ever been caught in an uncomfortable interpreting scenario, you may have felt yourself clam up in the exact same way. Knot in the stomach, tense shoulders, heat rising; the whole nine yards. It’s true that perhaps no-one is raising their voice this time around, but as you start to feel more and more nervous, you literally develop a mental block that stops you from listening. Anything can trigger it—a lawyer criticizing your interpretation, an especially monotone judge, or an attorney who speaks technical language at a million words per minute. It is at that point that we usually blame our memory for not serving as properly when in reality, it is our mental processes that need fixing.

The solution, of course, is to identify your mental responses and deflect them before they overpower your ability to listen. This can be accomplished through two steps: The first step involves a practice of intentional breathwork, meditation, and actively changing your inner voice. I will write on this more at some point, and I have already explored it a little HERE.

It is on the second step, however, that I’d like to focus today. The second step is learning to listen, no matter what. No matter how scary the situation, how defensive you feel, or how high-register the language, you must never stop listening. But you have to do more than just hear words while writing as many of them as you can as furiously as possible. You have to listen to understand. In other words, you have to analyze.

The process of analysis is extremely complicated, and yet I’ve rarely heard it explained. What does analysis actually look like?  Two weeks ago I set out to answer this question with the Delaware Valley Translator’s Association (DVTA). Their yearly conference, like so much else this year, had to be transformed and adapted online. But that didn’t stop us from having a very interesting exploration into the analysis.

Take this extremely long utterance: It was Aug 7, 2019. I got up early that day because my kids have to be at school no later than 8 am. After I take a few moments to myself (I can’t live without my cup of coffee), I wake up my older daughter. Then, I wake up the younger one. So it wasn’t until 7:45, when we got outside to my car, that I realized something was very wrong.

In all likelihood, you will start to feel panicked as the utterance gets longer and longer. The remedy? Implement all that breathwork you’ve been learning, and then, with lightning focus…listen and analyze. You will learn to identify each individual idea as it comes in, and you will identify how it relates to the previous ideas. They can be organized in your head a little bit like this:

I got up early that day

because my kids have to be at school

After I take a few moments to myself

(I can’t live without my cup of coffee),

I wake up my older daughter.

Then, I wake up the younger one.

when we got outside to my car,

that I realized something was very wrong.

Note how the indentations mark the relationship of one idea to the previous one. Sub-ideas become indented. Brand new ones go back to the left. It is your work as an interpreter to identify this as you hear it. The structure of the ideas will be reflected in your notes once each individual idea has been fully formed. But the important thing is to be able to notice that structure as you are listening. You can practice this by pausing audio after each segment, or even by re-organizing written texts.

Then, too, as you are listening, you should learn to immediately identify key points. I’ll show them highlighted below. Key points are in red and connectors are in blue.

I got up early that day

After I take a few moments to myself

(I can’t live without my cup of coffee),

I wake up my older daughter.

Then, I wake up the younger one.

when we got outside to my car,

that I realized something was very wrong.

All of this analysis is taking place in your head. It is only once you have identified a key point and how it relates to the last, that you take your pen to paper. In this way, your notes complement and reinforce what you have already heard and understood.

Here are some notes now, lifted from my DVTA PowerPoint. You can identify symbols for home, car, realize and wrong. You will also see abbreviations. Finally, the structure of the notes mimics the analysis that is already taking place inside my head. 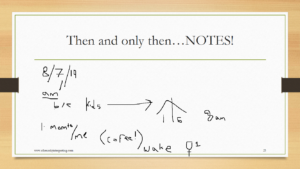 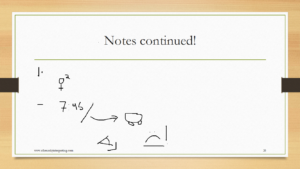 And there you have it! If you learn to quiet the voices in your head, and then to analyze with the utmost concentration…well, if you can do that, no-one will ever be able to accuse you of “not listening.” Good luck!

Athena Matilsky fell in love with Spanish the year she turned 16. She chose it as her major at Rutgers University and selected a focus in translation and interpreting. After graduation, she taught elementary school in Honduras and then returned home to begin freelancing as a medical and court interpreter.

Athena since achieved certifications as a Healthcare Interpreter and a Federal Court Interpreter. She was the recent editor-in-chief of Proteus. Currently, she works as a freelance interpreter/translator and trains candidates privately for the state and federal interpreting exams. When she is not writing or interpreting, you may find her practicing acroyoga or studying French. Website: https://athenaskyinterpreting.wordpress.com/

11 thoughts on “Learning to Listen”