27 Oct How did these words get in my head?

Lately I’ve been asked a lot about test-taking “tips”. Of course, the federal certification exam for judiciary interpreters was recently administered, so it’s at the forefront of many certification candidates’ minds. However, rather than suggesting some test-taking “tips”, I’d like to offer this one particular skill-building tip.

You cannot do well in any interpreter certification exam if you simply do not have the skills.

Well, then, in that case you should have no trouble at all with the test. For those who are not so sure, let’s start with the most basic of all skills: vocabulary.

Words are our fundamental building blocks. Our job is linking words in one language with words in another language that mean exactly the same thing. Of course, there are rules for the way in which we string these words together so they make sense, because words, after all, are just arbitrary groupings of sounds that we learn to discern within a “code system” we call language. There are also rules for what a word will mean depending on how we use it or where we place it in a sentence, because there is a limited number of sounds humans can make or string together, so the same sounds are used to mean different things depending on their context. During the acquisition of a second or third or fourth language, we start to associate words that mean the same thing in these different languages: house is casa, maison, haus, etc. And we also learn which words do not mean the same thing: house is not silla, pomme, or schlauch.[1]

How does the brain find those equivalent terms so quickly while we are engaged in consecutive or simultaneous interpreting? Well, it’s all a very complex relationship between our neurons and their synaptic connections, which is how the brain sends information from one place to another.[2] As we learn a language, all the lexical, grammatical, semantic, pragmatic information, etc., about that language 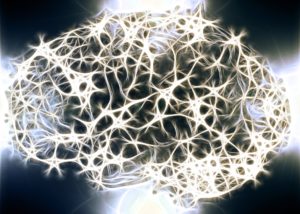 is stored in our long-term memory. To make it simple, let’s say that when we learn more than one language we can teach our brain to creates paths, or synaptic connections, between the words or concepts in those different languages, so that every time we hear “X” in one language the brain will connect it to “X” in the other language.

If we are not careful, however, these paths can also be created between the wrong words or concepts, such as false cognates. The good news is that if you have created a path between two words that do not really mean the same thing, you can actually “re-route” that path to the right equivalent. The brain is a wonderful thing!

The oldest technique to create these paths is memorizing glossaries. Once you have created that path in your brain, you may not need it for years, but it’s there. When you least expect it, a term you rarely use in your day-to-day interpreting comes up and your brain finds the path!

Creating your own glossary is another good way to build up these paths. The process of researching the meaning of one word in a source language, then finding the word with the same meaning in the target language, also tells the brain to create a link between them and store them in long-term memory with a synaptic connection from one to the other. Don’t forget to memorize the equivalent terms once you have completed the research. You may create your own flash cards, or make up games with fellow interpreters so you not only memorize the proper equivalents but also build friendships that will surely last a lifetime.

Another way in which we create these links is the repetition of boilerplate language, such as initial appearances, guilty pleas, or jury instructions. Synaptic connections can be created for entire phrases and sentences, not just words. The more of these paths we can create in our brains, the more confident we will feel about our performance.

Words are our most valuable currency as interpreters. We “buy” every other skill we have with this currency, and the more we have the “richer” our performance will be in either simultaneous, consecutive, or sight translation. Conversely, if you have significant gaps in your vocabulary, you will feel like you are inside one of those inflatable play houses for children, always wobbling and about to fall flat on your face.

Test-taking anxiety is usually caused by insecurities about some aspect of the performance expected from the test-taker. If you work on your vocabulary range in both source and target languages, and build up those paths in your brain between the right equivalents, your performance is much more likely to meet the required minimum standards for certification and your test-taking anxiety is much more likely to fade away.

That’s my “test-taking tip” for today.

16 thoughts on “How did these words get in my head?”