I’m sure most, if not all, of you have heard about emotional vampires or relationship vampires. Those are the people who suck your emotional energy and leave you feeling drained after they’ve been near you for any amount of time. Well, there is something else I have come to identify as “focus vampires” and they are not necessarily people. But they have that same effect of sucking all the focusing energy out of you so you end up feeling drained and incapable of completing any task on your to-do list, no matter how simple or complex.

By definition—well, my definition, at least—any distraction can be a focus vampire: a phone call from your BFF wanting to make plans for the weekend, the ice cream truck’s jingle if you have a sugar craving, or any emergency vehicle’s siren if you have 911-PTSD. It’s going to be different for everyone and the way we get our attention back on track after that distraction is also going to be different. For some it may take a few seconds, for others it may take hours. And depending on the severity of the distraction, it can take days, weeks, or even more.

In my case, the worst focus vampires are changes in my daily routine, particularly trips. I tend to be what we jokingly call OCD—not that I have been diagnosed with that disorder—and my relatively stable daily routine helps me focus on ideas, plans, and projects I want to develop in one direction or another. Some people think I have extraordinary amounts of energy but the truth is that I don’t. I am just very methodical about staying focused and taking one idea, one plan, or one project at a time from beginning to end. But if for some reason my daily routine gets changed, then everything gets scattered in my brain and I have the hardest time getting it all mentally organized again to the point where I can continue to work effectively until I can complete even a single one of the tasks I had already started.

The focus vampire of multitasking

Some people think they can take on several projects at a time and then, when they have a hard time seeing them through, they wonder if there is something wrong with them. Not likely. Chances are they are being victimized by these focus vampires and aren’t even aware of what is happening to them. “Based on over a half-century of cognitive science and more recent studies on multitasking, we know that multitaskers do less and miss information. It takes time (an average of 15 minutes) to re-orient to a primary task after a distraction…” according to a report in the Harvard Business Review.  Jon Hamilton, NPR’s correspondent for the Science Desk, explains: “Humans […] don’t do lots of things simultaneously. Instead, we switch our attention from task to task extremely quickly.”

So it’s not really a matter of having more or less energy. It is a matter of carving out some space and time purposely designed for you to plunge into some uninterrupted focused attention. Granted, this is not what is expected of us in a world of multiple windows open in your computer screen with emails and search engines while also texting on your phone and maybe having the TV on in the background. We are expected to focus on four, five, six different things at the same time. But that’s just not how our brains are designed to work. “Stanford University researcher Clifford Nass found that people who were considered heavy multitaskers were actually worse at sorting out relevant information from irrelevant details.”  Multitasking is the biggest focus vampire of them all. 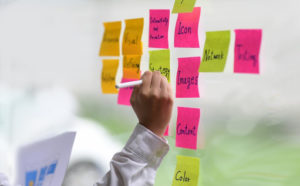 Here is my solution and I admit this may not work for everyone, but it works for me. Pick one task, one project, one idea, one plan, and take it from beginning to end. Finish that one, then start the next one. If you get distracted by a different idea, a new plan, someone else’s project, put it on hold or the back burner, or write it down so you don’t forget that you want to pursue it, but leave it alone until you have finished the one you already started. If you get distracted by the phone ringing, or the hungry kids who need you to go fix them dinner, or the boss calling for an emergency meeting, make a parenthesis on that time you have identified as your creative time, but do come back to pick up where you left off. It doesn’t matter if after the distraction it then takes you an hour, a day or a week to get your focus back.

Just don’t jump to another project. Don’t abandon what you had already started just because you got distracted. This is the only way I know to defeat the focus vampires.

Janis Palma has been a federally certified English<>Spanish judiciary interpreter since 1981. Her experience includes conference work in the private sector and seminar interpreting for the U.S. State Department. She has been a consultant for various higher education institutions, professional associations, and government agencies on judiciary interpreting and translating issues. She worked as an independent contractor for over 20 years in federal, state and immigration courts around the U.S. before taking a full-time job. Janis joined the U.S. District Courts in Puerto Rico as a staff interpreter in April 2002 and retired in 2017. She now lives in San Antonio, Texas, embracing the joys of being a grandmother. She also enjoys volunteering for her professional associations, has been on the SSTI and TAJIT Boards, and is currently on the NAJIT Board of Directors.
Contact: jpalma@najit.org