23 May It’s Not a Matter of Trust and Credibility

I have been an interpretation and translation practitioner for fifteen years, and during this time I have wondered why judiciary interpreters must be sworn in before every assignment, sometimes even before the same judge, more than once a day.

Most states that grant language-interpreter certification require an oath of office before certifying an approved candidate. Some states assign a certification number and issue an official ID with photograph that allows interpreters access through the personnel door to bypass the security check.

Practices and protocols vary widely, however. There are certain counties in California and in the administrative courts, such as the Executive Office of Immigration Review or the Social Security Administration, that keep an oath on file that does not expire. In some jurisdictions, once you are sworn in before a judge, you no longer need to be sworn in for each individual assignment. In other courts, the written form signed before obtaining the certification has permanent validity. In all states where I work (New York, New Jersey, Illinois, and Wisconsin), however, you are sworn in for every hearing, although a few judges ask if you have been sworn in that day and take that prior oath as valid. My question here is: why can’t certified judiciary interpreters just put their appearance on the record like attorneys do?

I have consulted with colleagues, court administrators, offices of the clerk and of the sheriff, judges, and attorneys. Although I have received many answers that are logical, none so far have fully demonstrated, in my layman’s view, the need for repeated oaths. 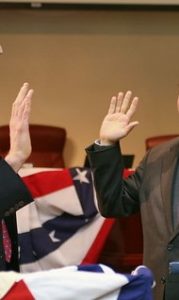 Taking an oath to uphold our code of ethics is a great responsibility, one that is so important to our profession that it remains with us at all times. It comes to mind if we can’t hear a speaker, if someone is speaking too fast, if a statement is convoluted, if someone mumbles, if there is background noise during a virtual hearing, or if you lack a partner during a long hearing. We think of our oath constantly when these issues disrupt our rendition because we have sworn to uphold this code of ethics including interpreting fully and completely, without adding and omitting anything, etc. Occasionally to fulfil that oath, we intervene on the record to address an issue. To uphold a code of ethics, a daily, let alone hourly, reminder is not needed. A professional, sworn-in, certified interpreter does not need this.

I have to admit that it all boils down to this. Interpretation as a nascent profession does not have a standardized process for certification. All attorneys, except in President Lincoln’s time, have had to go to law school and/or pass a bar exam. Every one of them. Not all interpreters are certified, and our academic education differs from one interpreter to the next. There are all levels and types of interpreting programs. Even the exams are not all the same. There isn’t a national standardized test that all states use. Though most are similar in that they use the National Center for State Courts exam, not states all do. Some of the state credentials are called certification and approval. Some have two levels, journeyman and master, while others also include a “conditionally approved” category. Some have as a minimum passing grade of 70%, while for others it is 80%. There are some states where 60% qualifies you to work as a conditionally approved interpreter.

Fundamentals of Court Interpretation, chapter 18, page 415, tells us the following:

“The legal status of court interpreters is still a gray area, because interpreters are undoubtedly officers of the court yet, under Rules 604 and 702 of the Federal Rules of Evidence and other similar state court provisions, interpreters are subject to expert witness challenges.”

These are the rules I am referring to:

Rule 604. Interpreter; An interpreter must be qualified and must give an oath or affirmation to make a true translation.

As I see it, Rule 604 compliance is already covered by the oath of office each certified court interpreter swears to. Here is a sample of one I signed before I was granted certification:

Oath of Office for Court Interpreters

As I understand it, Rule 702 applies only to interpreters while testifying, so this has no bearing on the subject at hand.

I am a law-abiding citizen and like to follow rules, and so as long as it is a requirement, I will comply. That’s the way it must be. But once in a while, I want to understand the protocols and rules.

What’s your take on the issue?

Hilda Zavala-Shymanik is a state certified/approved Spanish court interpreter and translator with more than fifteen years of experience in legal, medical, corporate, and non-profit settings in New York, New Jersey, Illinois, and Wisconsin. She is a board member, treasurer, Conference Committee chair, member of the Training and Education Committee and blog team of the National Association of Judiciary Interpreters and Translators as well as former president of the New York Circle of Translators. She is an active and voting member of NAJIT, ATA, and other professional groups. Hilda has two certificates in Legal Interpreting in Spanish and English, the latest one from NYU. Hilda is a former a Staff Interpreter at Essex County Superior Court in New Jersey, where she worked for six years. She now lives and works as a freelance interpreter in the Chicagoland area. Born in Chicago, Hilda lived for twenty years in Mexico and loves traveling. She continuously looks for opportunities to promote and advance the interpreting profession. Contact: hzavala@najit.org

Main photo from “The Significance of Trust” by Eric Sheninger from A Principal’s Reflections, under CC BY 3.0. Body photo from “Chris Zimmerman’s Swearing-in Ceremony” (cropped) by Cliff from flickr, under CC BY 2.0.