While I was sitting on the couch with my mother, who is currently visiting me from Mexico, she sighed deeply, and when I asked her why she was sighing, she looked at me and said: “I so regret the decision I made years ago to return to Mexico. Had I known that you and your sisters were going to return to the U.S., I would never have left.” My mother was referring to having returned to Mexico after meeting and marrying my father in Chicago, Illinois, and having their first three daughters.

My parents moved to San Luis Potosí, Mexico, in December 1974 from Chicago, where the three older sisters, Paula, me (Hilda), and Marisa had been born, in that order. In 1980 and 1983 my two younger sisters, Alejandra and Mariana, were born in Mexico.

Twenty years later, in 1994, I went back to the U.S. with the goal of working for a year and returning to Mexico with enough money to establish myself with a little business. However, the way events happened, things went well for me in this country and my two Chicago-born sisters, Paula and Marisa, followed me here.

Living in a country like the U.S., with the opportunities that it implies, makes us imagine that the life of immigrants is magically better when they arrive almost by osmosis. However, nothing can be further from reality for many immigrants, as was the case with my mother.

My story and that of my siblings is not dissimilar from my mom’s. In fact, it is very much like it. We grew up with all kinds of comforts, even luxuries, and not wanting for anything. My whole family has traveled throughout Europe, to many countries; we attended the best private schools and we lived in the best residential neighborhoods. All this well-being was forged by my parents in the U.S., and it was continued once in Mexico based on ingenuity, a lot of effort and tenacity. However, for various reasons, the three older sisters ended up on this side of the Rio Grande. In general, we have this story in common with many Latin Americans, I suppose. This is the story that Mom told me that night on the couch, just a week ago:

My grandfather began working in California under contract with the “Bracero Program” (a bilateral U.S.-Mexico agreement that allowed Mexican men to come work on agricultural labor contracts, primarily) around 1951 in what they called “la pisca” (the harvest), and he visited his wife and children in Mexico once a year.

It was a challenge for my mother to go through these tender childhood years without the constant father figure, as it was for the entire family, especially my grandmother, the matriarch. So when the opportunity presented itself in the form of an amnesty in 1960, my grandfather took advantage of this and brought the whole family to Chicago, arriving in the Windy City in 1963 with a wife and seven children.

My grandmother Teresa’s family life in Mexico with her kids took place with a hint of abundance, the Ayala Sandovals being one of the first families to own a black-and-white TV around 1955. The afternoons would find the neighbors milling around the living room to watch TV shows, not to mention boxing nights when there were so many guests that neighbors were watching even through open windows. My mother and her siblings attended a private school operated by nuns and had maids at home who even dressed my mother as a child before preparing her breakfast and walking her to the nuns’ school. This was a situation made possible by my grandfather’s hard work in the U.S. and the constant remittances that expanded the family coffers after the struggling years and hardships in Mexico for lack of a stable and well-paid job.

From this environment, the contrast that the family found when migrating to the U.S. was brutal, especially for the older children, since the younger ones had the ease of childhood to adjust to new circumstances and the ability to absorb a new language and culture at a tender age, when their personality had yet not been set in stone.

My mom’s first job that summer of 1963 was babysitting and feeding the family children for lunch, so it’s no wonder my mom felt like a maid. “See the ironies in life?” reflected my mother. “In Mexico we had helpers at our service and now here, I’m the maid,” she says with a roll of the eyes.

I Never Felt Part of This Country

“I never felt part of this country. Latinos at school did not speak Spanish. It even made me laugh that these kids didn’t even know how to pronounce their own Hispanic names properly, and that frustrated me because I hoped someone would help me, since I didn’t understand anything they said to me.” English was never easy for my mother, and she worked hard to learn what little English she knows, which by the way is quite a lot, even if it doesn’t seem like it to her.

At that time there were no bilingual or English as a Second Language programs at her school, and she suffered a lot of abuse and intimidation from her schoolmates. Dealing with the culture shock was also overwhelming. While in Mexico society instilled in you that being Mexican was something in which you took pride, in the U.S. you were not to mention your nationality. “Now we were supposed to be ashamed of being Mexican?” Mom exclaims. In addition, there were the locker rooms at school. Changing clothes in front of the classmates, as everyone else did, was problematic for my mother, who was raised with the typical modesty of our country during that time. In short, the school experience was traumatizing.

Sometime later, Mom had the chance to attend a special night program run by nuns for Latinos where she managed to learn the language more formally. She was also able to learn more at the grocery store that she helped Grandpa Luis run, and where she had worked since the end of 1966. When customers asked for something, if they didn’t have it in stock, she asked them to write it down on a piece of paper, and the next time they came it was already in stock. Thus, she learned the name of many products. “I can read a little and understand a lot, but not write. I never learned properly,” she tells me.

As a result of this story, when my father suggested to my mother that they should return to Mexico together, my mother did not hesitate for a second. And so, this resulted in a family geographically split for many years to come.

My family’s tragedy was that some of us stayed on this side of the border, and some stayed on the Mexican side. My mom and two sisters with their families live in Mexico, and the three older sisters live here. Even worse, the two sisters in Mexico have no visa and no way to get one. We have waited seven and a half years to get a visa approved for my younger sister, and now it could take up to twice as long for a visa to become available, so that if one of the older ones died in the U.S., the rest would not even be able to come to the funeral unless they get an emergency visa.

The sisters living in the U.S. go to Mexico at every opportunity, but that limits the time any of us has to vacation elsewhere. Mom comes to see us at least once a year, but for a family like ours these contacts are insufficient. Dad passed away five years ago and could never get over having “lost the battle” against the geographic divide.

We left cousins, uncles, and best friends behind, and although we have forged new friendships and strengthened relationships with relatives here, there is a deep void that can never be filled. That is the family’s tragedy. One that cannot be overcome. 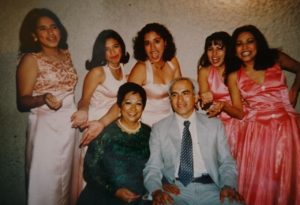 The Best of Two Worlds

My sisters and I grew up with strong family ties and we preserve that cultural heritage we got from our parents. But here in the U.S. we have learned other ways of being, living, and facing life. We also assimilated and know about individualism, equality, and meritocracy–concepts not as common back home when we lived there.

Paula, Marisa, and I are interpreters in the legal, medical and conference fields. The three of us make a living thanks to the Spanish we learned from our international experiences. As part of our cultural heritage, we three have the skill set to be cultural brokers, an advantage and necessity when engaged in our respective professions.

Yesterday my sister Marisa, an interpreter in the medical field for eleven years, reading the draft of this letter, commented: “I do not agree with that statement from Mom. I would not regret it because the decision she made allowed us to be who we are and to live the lives we live and the way we earn a living. If we hadn’t grown up in Mexico, only God knows what our lives would be like.”

After all, each person sees things from their own point of view. I miss my family and I always will, but I am grateful for having lived in Mexico for twenty years. I personally think I got the best of both worlds!

Hilda Zavala is a state certified/approved Spanish court interpreter and translator with more than thirteen years of experience in legal, medical, corporate, and non-profit settings in New York, New Jersey, Illinois, and Wisconsin. She is a board member, treasurer, and Conference Committee chair of the National Association of Judiciary Interpreters and Translators as well as former president of the New York Circle of Translators. She is an active and voting member of NAJIT, ATA, the NYCT and other professional groups. Hilda has two certificates of Legal Interpreting: Spanish/English, the latest one from NYU. Hilda has been a Staff Interpreter at Essex County Superior Court in New Jersey for over 5 years. Born in Chicago, Hilda lived for 20 years in Mexico and loves traveling. She continuously looks for opportunities to promote and advance the interpreting profession. Contact: hzavala@najit.org