09 May Best Practices for Witness Preparation

I was talking to a friend and colleague recently about all the in-person work we’re starting to get in court, both civil and criminal. She mentioned, in passing, that she had received a call to prepare a witness for trial. The conversation turned to the issue of having separate interpreters for witness preparation and then testimony at trial. I brought it up with another friend and colleague afterwards, which made me realize this is something that warrants a carefully thought-out best practices guideline for interpreters in legal settings.

Who calls a witness?

In criminal matters, both the prosecution and the defense will take the testimony on direct examination only of their own witnesses. Cross-examination is conducted by the opposing party. When either side prepares a witness for trial, they go over their own questions and try to anticipate what opposing counsel will ask, which will be mostly yes-or-no questions. Attorneys will advise their witnesses to listen carefully to each question and answer only what they are asked.

In civil matters, each side gets a chance to depose—that is, take the testimony under oath—of the other side’s witnesses before a trial takes place. They get to hear what the other side’s testimonial evidence will be if the case ever goes before a judge and a jury. Preparing a witness for a deposition is very different from the preparation of a witness for a criminal trial. Since the attorney doing the preparation is not the one who will be asking the questions, it all boils down to anticipating the adversary’s questions on direct.

Who hires the interpreter?

In civil matters, each party is responsible for hiring their own interpreters for litigants and witnesses at trial. For depositions, however, the party hiring the interpreter is the one conducting the direct examination, so it will be the opposing party for that particular witness.

Is there a conflict?

Sign-language interpreters have a standing rule not to interpret for the same witness during preparation and subsequent testimony at trial. There are scientific and empirical grounds for this separation of interpreter engagements, based on the way in which the brain processes visual versus auditory information and how it is stored in short- and long-term memory.[2] That same evidence would support the opposite rule for spoken-language interpreters.

Our professional community has not taken an official position on the question of an inherent conflict when interpreting for the same witness during preparation and testimony. Given the fact that attorneys and judges are not always aware of our ethical duties to safeguard attorney-client confidentiality and to remain impartial at all times, we find ourselves too often in the crosshairs of unfounded objections. Having the same interpreter for witness preparation and testimony on the record should seem like an ideal arrangement. All terminological questions would be resolved during preparation, and in the end, the actual testimony on the record should be flawlessly rendered. Clearly, there should be no conflict whatsoever when the same party hires the interpreter for preparation and testimony.

Do interpreters become part of the “plaintiff’s team” or the “defendant’s team” by virtue of their having been engaged in the witness-preparation phase of a case? 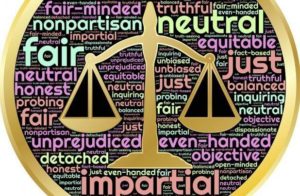 Answering these questions in the affirmative necessarily assumes that the interpreter cannot remain impartial regardless of who does the hiring. It also assumes the interpreter will not safeguard the confidentiality of anything interpreted previously. Limiting an interpreter’s ability to be engaged with any of the parties in the same case at any stage of the proceedings calls into question the very moral fiber of that interpreter and, by extension, all interpreters.

Of course, we can always recuse ourselves if we feel we cannot remain impartial. That is also part of our ethical alignment, and doing so is a reflection of our professionalism. But it is quite detrimental to our profession when we allow misinformed attorneys and judges to impose limitations and restrictions on our professional practice and standards.

If we take for granted that interpreters are abiding by their ethical duties to remain impartial and protect confidential communications, there is no reason to acquiesce to a compartmentalized practice that limits when and where an interpreter can be professionally engaged. It is up to each one of us, of course, to enlighten our clients and stakeholders. Each one of us has a duty to educate stakeholders about the ethical scaffolding upon which we build our practice every single day, so the reality of the judiciary interpreting profession prevails over any misinformed perceptions.