04 Aug An Unquenchable Thirst for Learning

I have always been a curious individual. I recall asking my mom if Jesus was history or legend (got a scolding for that one), and asking my Biology teacher where the first bacteria found RNA to replicate its DNA from – she was just as happy as my mother about my question.

It turns out that my curiosity is a great asset for my current professional life.

In reality,  to be a T&I professional, one must be on the lookout for learning opportunities. Sometimes they bombard you when you least expect, such as in an assignment that was described as one thing and ends up not being that at all. 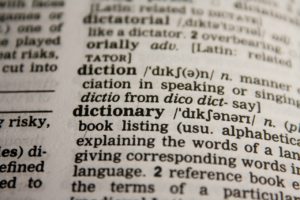 I “endured” such an experience when I client confirmed my assignment was for Brazilian Portuguese and the matter was a simple insurance adjuster’s interview related to a car accident. In actuality, the witness spoke European Portuguese, and the car accident had happened inside a container ship, in the high seas. Maritime insurance is totally out of my scope of knowledge and European Portuguese in such a specific area is scary.  I am grateful for a very patient client and my Oxford-Duden Pictorial Dictionary.

Taking notes to help our recollection and to assist the court reporter are common practice.

I added one more to my routine: special solutions to hard, uncommon or unusual terms and expressions I run into at depositions and like assignments. The list is constantly growing, even when I am not on the job.

I have developed the habit of always having something to write on or record into with me. I jolt down expressions that make my brain do a double take: “get some air” which in rollerblading, skating and snowboarding means to go higher; tá fechado in negotiations is Portuguese for “done deal,” for example. And there are those expressions that make me wonder if I am living up to Canon 1 of our Code of Ethics: Accuracy. An example is the phrase “Isso.” The grammatical equivalent would be “That’s it”, the colloquial equivalent would be “That’s right”, but it simply means “Yes” when it is not emphatic. There are situations when one or the other form fits better. But, then, the problem is the occasional Spanish-speaking attorney who knows he did not hear anything close to a “sí,” or the ones who took Portuguese in high school, or dated a Brazilian, and argue when I render an occasional O.K. as “yes.” I vividly recall one such instance, and later on the attorney approached me to explain that he was just striving for accuracy and he had clearly heard the witness answer “OK.” My reply was that when a witness says “I see” it is not rendered as “I have a visual reference” because everyone knows the expression means “I understand,” and that is the message I have sworn to uphold: the meaning of the utterance.

There are so many “linguistic” opportunities for misunderstanding.

People who know “a few words” or “studied some Portuguese” can pose a problem. For example, pois não, despite the negative particle means “yes” or “with pleasure” or, yet, “how may I help you;” pois sim is a negative expression meaning “no way,” “in your dreams,” much like absolutamente is a very strong negation. But still, they have to interrupt and question the professional’s accuracy…

My lists keep growing, and I am careful to include references such as field and grammatical function just to make sure I don’t find myself trying to guess what I meant, later.  The entries might end up in a glossary or two, but the main point here is to illustrate that learning can take place anytime, anywhere and as long as you are open to it, the experience is positive.

So, embrace that thirst for learning and turn each linguistic obstacle into an opportunity to enrich your knowledge base.

Brazilian-born Giovanna “Gio” Lester’s career in translation and interpreting started in 1980. Gio is very active in her profession and in the associations she is affiliated with. In 2009, she co-founded the Florida ATA Chapter (ATIF), served as its first elected president (2011-2012), and later as president of its interim board. As an international conference interpreter, Gio has been the voice of government heads and officials, scientists, researchers, doctors, hairdressers, teachers, engineers, investors and more. Gio has been a contributor to The NAJIT Observer since its inception in 2011, and its Editor since 2016. You can follow her on Twitter (@cariobana) and she can also be reached at gio@giolester.com.