We are all in this together, but while we are all in the same sea, we are not all in the same boat. We know this pandemic has affected people differently, and everyone has experienced it in a different way. For most people, for instance, the pandemic entered their lives bit by bit—albeit at an incredibly fast pace—until it completely took hold. I, on the other hand, can tell the exact moment at which the pandemic unleashed its full force on me, and all I could do was watch as that life disappeared in the rearview mirror.

On March 9, 2020, at around 12:00 p.m., I was driving back home from the hospital where I work(ed) as a medical interpreter—just as I had for the last several years—when I got a call from Health Canada. I remember seeing the caller ID and thinking, “Oh no! That angry Alzheimer patient’s relative did go through with it and filed a complaint against the care team that took his father’s driver’s license away (and I was the interpreter)!” You see, I work at the Seniors Clinic, where most patients have Alzheimer’s, dementia, or something similar, and some relatives do not take it well when the team informs them their loved one can no longer drive (or continue leading the life they had led, for that matter), and sometimes, they threaten to file complaints. The weeks before had been no exception. So, I took a deep breath and picked up the phone. The lady on the other end told me to pull over before she discussed the matter at hand. And I did. She then broke the news: one attendee at the conference where I had been working a few days before had tested positive for COVID-19, and I was identified as a potential close contact. (For context: at that time, there were only a few positive cases in my city, and the risk for the general population was considered low.) She then went on to instruct me to go straight home, not to get out of the car, and self-isolate for fourteen days. You know, what we now consider as “normal.”

“But I have to pick up my children from school,” I said. “Get someone to pick them up for you,” she replied, “and if possible, don’t have them come home at all.”

And so began the longest fourteen days of my life… Back then, little was known about the virus, and instructions were scant as to what to expect or what could happen. There I was, isolating, not able to see my children, my husband, or my pets, and scared to death as to what could come my way.

While in isolation, I saw the WHO declare a pandemic and the whole world get thrown into chaos. A state of emergency was declared, cases spiked, borders were closed, flights were cancelled, people were stranded abroad, school was cancelled, extracurricular activities were cancelled, stores restricted admittance (to say nothing of the toilet paper frenzy), people were asked to work from home, lockdowns were put into place… and interpreting assignments were cancelled.

By the time I emerged from solitary confinement in my bedroom, the world was not what it used to be… nor would it ever be again. I was in a completely new world, with my (once packed) agenda completely blank for the next few months. All my court assignments and conference bookings had been cancelled. The hospital was not seeing patients anymore. My colleagues reported similar prospects. We were all in despair: what could we do now? Our livelihood was in peril, like that of many others.

Fortunately, I had been one of the early adopters of RSI. I had some clients (only a few at that point) who had been working with me using RSI, and I was familiar with platforms such as KUDO, Interprefy, and Voiceboxer. I had always been a firm believer that RSI was the future of interpreting and a good way to democratize language access… but the future had come sooner than expected.

With nothing to lose and relying solely on my translation jobs, I set into convincing my clients to start using technology to navigate these unchartered waters. After all, a leap was made in the interpreting arena during the Nuremberg trials thanks to technology, and this could very well be the next step.

Little by little, clients started using RSI platforms, some of them requiring more guidance on my part, others leading the transition themselves. Both hospitals and courts deployed their own solutions to move everything online, and my agenda began to put some meat on its bones again. The conference world followed suit.

In a few months, I had mastered platforms the likes of KUDO, Zoom, Interprefy, Interactio, and many others. My life was online now, and it was not all that bad… OK, granted, this part of the story very much resembles that of my colleagues.

Fast forward roughly twenty-one months, and I have four quarantines under my belt (yes, three more followed that first one, none of them involving any trips on my part), I survived COVID (twice), I was my kid’s teacher when school went online (something I strongly advise against), I celebrated more Zoom birthdays than I care to count, and I became a fully-fledged RSI interpreter (with all the challenges it entails, which by no means do I intend to undermine here).

The world has certainly changed forever. Things WILL get better, but life has shifted for good. Yet change is not bad; it fuels progress and encourages us to do better. This crisis has forced us to take that leap and adopt technologies that will provide better language access for everyone. Events will now be hybrid, which will make them available for those who, in the past, were not able to attend due to geographical challenges. Languages that were difficult to procure can now be made available. Language inclusion will finally gain momentum. And I… well, I am just glad to get to be a part of this. 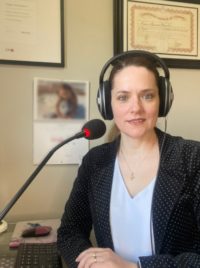 Eugenia A. Strazzolini is a certified translator and medical, court, and conference interpreter. She graduated as a translator (MA) in her native Argentina and went on to study in England and in Canada, obtaining her Master’s in Conference Interpreting in the latter. She has over two decades of experience, and she has worked and lived in several countries, including Argentina, Bolivia, Italy, Spain, England, and Canada. She also tried her hand at teaching legal translation at a university in Argentina for a brief period of time. She is a member of ATIO (Canada), CTINB (Canada), ATA (U.S.), AATI (Argentina), CTTPC (Argentina), and ABIT (Bolivia).

7 thoughts on “All of a Sudden”