Talking to my mother the other day, I asked her if anything similar to Thanksgiving Day existed in Mexico, but it seemed that the closest thing we have there is New Year’s. She was right! It’s hard to remember all those holiday details after living twenty-seven years in the U.S. Over that time span I have been back home at least once a year, once only for Christmas and perhaps twice for New Year’s. But my mother’s comment brought back memories of the New Year’s toasts, all of which revolved around giving thanks.

This year, I have a great deal to be grateful for, both personally and professionally. These two worlds became intertwined for me because most of my friends are interpreters, translators, or somehow involved in the legal field.

Almost at the top of my Thanksgiving list are the six years I worked as a Spanish staff interpreter at Essex County Superior Court, in Newark, New Jersey. I resigned from my position on October 29, and my last day was November 12, 2021. Yes, less than two weeks ago!

I started freelancing in 2007 in the Chicagoland area but moved to New York City in 2012. I was certified in the summer of 2013 in New Jersey, shortly thereafter in New York, and by the end of 2015, I had the staff job I referred to above. The transition, despite my being warned it would be difficult, was not at all problematic; I loved my job from day one. My colleagues were incredibly professional and helpful. We also clicked as friends almost right away. My supervisor is a great and easy-going guy. Working trials every other week was fascinating, and testimony allowed me to improve my consecutive. I also realized that passing the certification examination was not going to cut it for me, so I embarked in a frenzy of class taking and glossary creation, and I became a better interpreter with time and effort.

Paying it forward: the big payoff

Throughout my time at Essex in Jersey, I continued freelancing here and there, though less and less given my limited availability. But I never severed ties with my colleagues in New York immigration courts and in New York and Illinois state courts. On the contrary, my network grew to include all my new friends in New Jersey. I organized events, gatherings, and training programs, and I found every opportunity to socialize with people in the tristate area. I didn’t neglect old and new agencies, either. Although I could accept less work given my increasing volunteer activities, I never received a job offer without recommending a friend, always CC’ing them as I gave their names. This was easy enough since I met an average of five new interpreters per month. At the very least!

Therefore, although I had never worked for many of these agencies, they never stopped reaching out to me. And I had built a web of friendships that time, nurturing, and interaction would strengthen. These new friends became new participants at my gatherings or joined my network of friends and professional acquaintances. 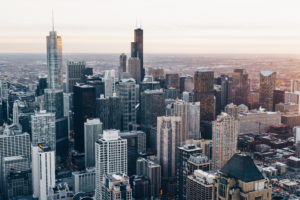 Fast forward to my first two weeks as a returning freelancer, and I am happy to report that I have already billed nearly all of my previous monthly take-home pay. That is what I call a big payoff!

Reflecting on the previous year’s events, there is a long inventory of things to be grateful for. First of all, most of my family, friends, and colleagues are in good health. Somehow, we are weathering the economic situation created by the pandemic. And lastly, but most important of all for me, I am back in the Chicagoland area surrounded by family. I live one block away from one of my sons and thirty minutes from the other. All other family members are within an hour’s drive away. All my old friends, and even my former agency partners, are here for me during this transition. Going back to freelancing has not been hard, either, as I continue receiving all the job offers I received before. The only difference is that now, I am able to take most of the jobs myself, and I have some left over to pass along to friends and to trade with others.

Being back in Chicago is the year’s highlight for me, despite missing everyone on the East Coast. In March of this year, my son Gustavo moved back from Texas to Chicago. That was what really did it for me. My grandchildren are the likely culprits here – Leila, five, and Elijah, two. I adore them!

Hilda Zavala is a state certified/approved Spanish court interpreter and translator with more than thirteen years of experience in legal, medical, corporate, and non-profit settings in New York, New Jersey, Illinois, and Wisconsin. She is a board member, treasurer, and Conference Committee chair of the National Association of Judiciary Interpreters and Translators as well as former president of the New York Circle of Translators. She is an active and voting member of NAJIT, ATA, the NYCT and other professional groups. Hilda has two certificates of Legal Interpreting: Spanish/English, the latest one from NYU. Hilda has been a Staff Interpreter at Essex County Superior Court in New Jersey for over five years. Born in Chicago, Hilda lived for twenty years in Mexico and loves traveling. She continuously looks for opportunities to promote and advance the interpreting profession. Contact: hzavala@najit.org