02 Feb When Rewards and Frustrations Go Hand in Hand

Living in a multilingual community can be rewarding and frustrating all at the same time.

Miami is such a community. I find rewards in being exposed to so many languages and cultures wherever I am. It is frustrating when the population can’t differentiate between the languages they speak.

Some colleagues have mentioned the use of Americanized terminology in court or other encounters by the Spanish speaking individuals they represent. We have had discussions about whether to use the LEP individual’s version of the term or insist on using the correct Spanish terminology. And their examples are usually of Spanish speakers adapting English words in their speech.

Something similar happens to many Brazilians who have lived a long time in South Florida. In everyday situations and in depositions, I have run into individuals who have so mixed their Portuguese with Spanish that they do not even know what they speak anymore. It is not the famous Portuñol. They actually believe they are speaking Portuguese, but use Spanish words whose meaning they believe they understand.

I have had parents who took their children to the oficina do pediatra, and the issue is that oficina in Brazilian Portuguese is body shop in English and office in Spanish. In Brazil, we take our children to the Pediatrician’s consultation office (consultório). Just last week I ended up getting confused during an examination under oath (EUO) when the examinee said he had gotten a map and a direção to the location he was going to. I understood he got directions, but he had actually meant he was given an address, which would have been endereço in Portuguese. The examinee had used the Spanish false cognate and failed to communicate with me. 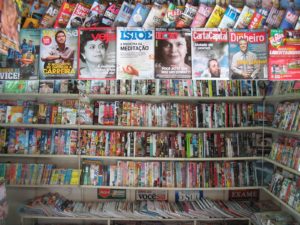 And the number of people aplicando para a universidade – and that is directly from English – is astounding. These are individuals who are seeking to transfer their credits from Brazil to universities here, in pursuit of their graduate degrees. They are educated but their English is only functional, meaning they can make themselves understood with some difficulty; it is not good enough to carry out a more involved conversation. Therefore, false cognates are an easy crutch – but they can render conversations a bit confusing.

Losing one’s linguistic identity can result in miscommunication and misunderstanding. That “direction” bit above took a few extra questions by the examiner to finally make sense to all. Using the right word would have saved us some frustration, time and done wonders for the rapport between the parties.

To all my colleagues, I recommend reading as a great way of keeping up with your language. And also read out loud, listen to your own voice, make a point of listening to broadcasts directly from your country to make sure you are getting the “clean” version of your language, and take courses in your own language. Those techniques have worked for me.

Brazilian-born Giovanna “Gio” Lester, Co-Chair of NAJIT’s PR Committee, started her career in translation and interpreting in 1980. Gio is very active in her profession and in the associations she is affiliated with. In 2009, she co-founded the Florida ATA Chapter (ATIF), served as its first elected president (2011-2012), and later as president of its interim board. As an international conference interpreter, Gio has been the voice of government heads and officials, scientists, researchers, doctors, hairdressers, teachers, engineers, investors and more. Gio has been a contributor to The NAJIT Observer since its inception in 2011, and its Editor since 2016. In 2017 she was appointed Chair of the Miami Dade College Translation and Interpretation Advisory Committee, which she had been a member of since 2014. You can follow her on Twitter (@cariobana) and she can also be reached at gio@giolester.com.
Click here to read other posts by Gio.

2 thoughts on “When Rewards and Frustrations Go Hand in Hand”