On a sunny fall day in 2013, I received a phone call from Grace. Who is Grace, you ask? It is hard to say who Grace is to me. She is a colleague, certainly. A mentor. A friend. My personal interpreting fairy godmother. It was thanks in large part to Grace that I found myself on the pavement outside that particular central Jersey courthouse on that particular day. That’s because I had taken over her position as staff interpreter when she left for a courthouse nearer to her home. Not only had she passed the baton along to me-she had also passed on some wise advice about how to handle my new position.

My lessons from Grace didn’t begin with her counsel on how to make the most of my staff interpreting job, however. She began telling me what to do from the moment I met her. Now, I don’t generally enjoy people telling me what to do, but Grace’s tips were always spot-on, so I followed them to the letter.

“Athena, give us your phone number immediately! We should be contacting you directly, not through agencies.”

“Athena, always get to your assignment early. That’s half the job. Getting there on time.”

“Athena, keep asking those questions! I hope that brain of yours never gets bored.”

It was Grace who informed me, in 2012, that I had to take the federal certification exam.

“But Grace,” I argued, “I have just finished NJ approval. I really don’t think I’m in the mood for another exam!”

“You have to do it, Athena,” she insisted, in that way that only she can. “They only offer it once every two years. What do you have to lose?”

I followed her advice, of course. I was half hoping I would fail the written exam, because then I wouldn’t have to take the oral. But of course, once I’ve started something, I see it through to the finish, so what followed was a year-long ordeal, studying for yet another test. But…I passed it. And I certainly don’t regret that. As my friend and colleague Virginia Valencia likes to say,

“The sacrifices won’t last a lifetime…but the results will.”

(Oh, and Virginia? I met her because Grace told me in no uncertain terms that I had to get touch with her. “You two have so much in common! Have you called her yet?” she asked me again and again until finally, I did. Fast forward to 2020, where my company and hers are collaborating on the biggest undertaking I’ve ever attempted as a trainer for aspiring federal interpreters.)

So when Grace called me on that fall day in 2013, it shouldn’t have come as much of a surprise that she had another idea in store for me.

“Athena,” she said emphatically, “I’ve given your phone number to a colleague. You don’t mind, do you? Of course not, I’m sure you don’t. She’s been trying to pass the certification exam for a while now, and I know you can help her.”

“What do you mean, help her?” I asked, a bit bewildered.

“Teach her what she needs to know! You’ll be great. I gave her your number, so you’ll be hearing from her soon.” 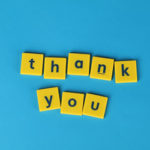 About seven years have passed since that fall day. That first student, with some of my help and a lot of studying, did pass the exam, as did my next two students. I left my staff interpreter position in 2016 to come to Montreal, and I began to take more and more private clients. They, in turn, have taught me valuable lessons. My own students have taught me how to value my time. To charge what I am worth. To understand the importance of what I do. They make suggestions about topics for webinars, tell me what they love about my classes, and bluntly inform me about how I can improve. Today, having finished my conference interpreting degree, I am a part-time interpreter and a full-time teacher. And as Thanksgiving approaches, I think I have a whole heck of a lot to be grateful for. I am grateful to everyone who has believed in me along my professional journey. To everyone who has encouraged me along the way. And, of course, I’m grateful to Grace.

And you? What are you grateful for? Who has helped you along as you wind your way through life? Please do share in the comments below.

Read other posts by Athena Matilsky.