I was listening to an interview of Korean American author Cathy Park Hong about her book, Minor Feelings: An Asian American Reckoning. She spoke of a mythical We that does not really apply to all Asian Americans because it lumps together the Pacific Islanders and the Koreans, the Chinese, the Japanese, and the Vietnamese; and because it makes no distinction between the Americans of South Asian, Southeast Asian or Eastern Asian descent. And I thought, “Of course! It’s the same thing with the Hispanic population in the U.S.” Hispanics in the U.S. include people from Central and South America plus the Spanish-speaking Caribbean. And we are certainly not all the same, not in the ethnic roots, the cultural traditions, the range of skin colors, and even when we all speak the same language, it does not sound the same everywhere.

I remember spending a good part of my early years trying to answer the ever-present existential question: who am I? I know that, for me, being a girl was a central part of that identity because there were so many things I could not do just because I was girl. My life was constrained by that part of my identity. On the other hand, I was really good at things like drawing, and writing poems. Those things made me happy so I thought, “when I grow up I want to be a poet and an artist.” Becoming an interpreter or a translator was not something I ever considered as a possible life path, as something that could be as integral to my identity as being female. And yet, here I am, three quarters of my life defining myself as an interpreter and translator and feeling as happy being that as I felt when I was drawing or writing poems in my teenage years.

Defining the Self is no easy task. Nor is it easy to decide who gets included in the plurality of the Self we have come to be. Who thinks the way I do? Who feels the way I do? Who shares my goals in life? My expectations? Who do I want to include in my first person plural? Well, I got lucky when I first encountered CITA—now NAJIT—and a group of other people eager to learn, to grow, to contribute to this new profession being built from the ground up in this country, people like me. This was my first clear sense of what my first person plural was going to look like, my very own We.

Different yet bound by a common purpose and commitment

That We I have come to treasure includes people of all shapes and sizes, from countries all over the world, of all ages, genders, colors and religions. That particular We is not one imposed on me by outsiders, by “others” who may see me quite differently from the way I see myself in the context of my 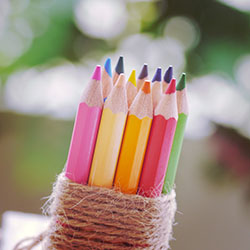 professional identity. There are Others who may see me—and perhaps all of us—as necessary evils or nuisances to be momentarily tolerated. Sometimes, those Others can have a negative impact on our self image, our collective identity, our cohesiveness as integral parts of this totality we call professional interpreters and translators. And we certainly cannot allow that.

Together we have gone through a journey of introspection and have embarked in a deliberate expansion of the skills and knowledge that define us. Together we have acquired the self-awareness of being experts in our chosen field. We cannot renounce the privilege of delineating the boundaries of our identity so others, outside of our profession, do it for us.

Now that we have matured as a profession, we must stand strong and affirm our collective identity so those who are on the outside—lawyers, judges, court personnel, litigants, all those Others who are not part of our We—can see clearly that the field has been occupied and no one but us can define who we are, what we do, and how we do it. Of course, having matured does not mean we have left our growing pains behind. We still have to deal with sibling rivalries and maybe even a few schoolyard bullies. But all in all, I can say we have come very far from the days when none of us knew what it really meant to be a professional interpreter in a courtroom, or to be a legal translator whose finished product ended up as evidence in court.

So let’s not call what we do an industry, let’s call it a profession. Let’s not call ourselves freelancers, let’s call ourselves independent service providers or consultants or contractors. Let’s start setting our fees for services rendered, rather than rates per hour, or word, or page or half-day, which make us sound like commodities instead of highly qualified experts. Let’s be very aware of the name we give to every single thing we do, and every single thing that defines us.

We have answered the question: who are we? We have taken ownership the Self and the boundaries of what defines us as professional judiciary interpreters and legal translators. It is up to us, now, to defend and protect and assert the We that is our choice to be.