01 May About Lost and Found Meaning

Having all this “free” time can mean watching movies we would otherwise skip on our streaming TV channels. I recently happened to click on a movie called “Lost and Found in Armenia,” a 2012 comedy written and directed by Gor Kirakosian. It’s about an American tourist, Bill, in Turkey, and for reasons you will find out when you watch the movie, he ends up in a barn in a very small village in Armenia. From that point forward, many of the movie characters speak in Armenian, so I had to rely on the English subtitles.

Sounds without meaning do not communicate

What made this movie particularly interesting was the fact that no one in that village spoke English and the American did not speak Armenian, so the plot begins to unfold along this subtext of misinterpretations and misunderstandings. When Bill tries to communicate by using a few words he seems to have memorized in Turkish, thinking he is still in Turkey, all he does is compound the problem.

The sounds coming out of the American’s mouth are similar to other sounds the Armenians think they recognize, so they come to the conclusion that the American is an Azeri-Turkish spy. This sparks yet another sub-plot in the movie based on Armenia’s history of armed conflicts and territorial disputes with Azerbaijan, Turkey, and Russia dating back to 1905.

When fear takes the lead

Even though this movie has a third romantic comedy sub-plot, my interpreter/translator mind began to follow the twists and turns that kept multiplying because even though the Armenians could not understand English, they THOUGHT they could recognize some sounds coming out of Bill’s mouth as actual words that had meaning for them.

Because they think he is there to harm them, Bill is kept in chains under the watchful eye of an older villager, who ventures to ask at one point: “how many people have you killed?” Bill answers “I have no idea what you’re talking about. What do you want from me?” Hearing this, the villager believes Bill has said “mek”, meaning “one” in Armenian.

The characters show no awareness of how they are misappropriating and misconstruing meaning as they go back and forth between languages, which is probably funny only to people like us who spend our lives making sure that never happens.

Cultural misinterpretation can be a barrier

As Bill is being held prisoner, his captors are trying to find someone in the village who can communicate with him. They first try Arshak, the barber, who “knows Azeri-Turkish fluently.” However, after an attempt to ask Bill for his name, Arshak—being a barber— says “Guys. His haircut tells me he’s not Azeri.” For a barber, the unequivocal sign is not in the words Bill speaks, but in the cultural marker he knows well: hair.

Not good enough for the Armenians, though. Now, during this exchange with Arshak, Bill utters and the Armenians recognize the word “American”, but they are not entirely convinced as they think all “Americans are tall, husky, well-fed cowboys”, which Bill is not. Nonetheless, as they keep trying to find a way to communicate with Bill, they send for Guidon, the butcher, who is supposed to speak English.

This is one of the best parts of the movie for me.

When Guidon walks into this old basement/military bunker where Bill is being held, he is holding a butcher’s cleaver and blood-stained smock, but his face tells the story of a man who is scared. He is told to go interrogate Bill because Guidon has been saying for years that he can speak English. When Guidon stands before Bill, the words that come out of his mouth are buongiorno signore… signore, buongiorno. Getting a blank stare from Bill, he continues: Alfredo… ravioli… spaghetti…

Actions do speak better than words

Now you and I know he does not speak English. Bill definitely knows that’s not English. As it turns out, Guidon confesses that he speaks “almost English”! (Don’t you just love it?) He was just trying to impress his wife before they were married so he told her he could speak English, but actually all he knows is a little Italian he learned from listening to opera. To this “almost English” Bill replied, “I just want to use a telephone”, placing his hand by his face, thumb by his ear, little finger by his mouth, imitating the sound of a ringing telephone: riiiiing…. riiiiing… Ah! This sound they understand! Onomatopeia!

When we do not share a common language, is that not what we resort to? Body language and onomatopeia? Signs and sounds that cut across 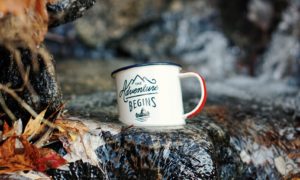 cultures because they are so basic and universal? Once we start to build more complex structures in language, once we as social groups begin to create or find things that have never been named before, and think thoughts that have never been thought or shared before, we need to find new words to signify, to be the aural sign that everyone who speaks that language will understand to mean the same thing. Albeit, those new words, those new sound combinations, will be completely random. Like at the end of the movie, this being a rom-com, everyone is gathered around, eating, drinking, toasting, and the girl—who ended up being the interpreter in the movie—is asked: “how do you say paterazm [war] in English?” When she answers, the Armenian hears, not “war” but “vorr”, which means “ass” in Armenian. So he tells Bill, “you’re a great guy but your language doesn’t make any sense.”

This is the lay person’s point of view. The language that is not one’s own makes no sense. But for us, for the language professionals, language must always be a source of wonderment. We must embrace it all, without judgment. There are no “right” or “wrong” words, even when there are rules of grammar and prescriptive academies. Our job is to learn them all, because we just never know when we will come across one of them. They all need to be part of our repertoire, part of the encyclopedic knowledge we store in long-term memory.

Because we humans have a limited range of vocal sounds we can make, the combination of those sounds is also limited, so those combinations must necessarily have multiple uses, hence the multiple meanings, the polysemy, of a single word or phrase. Language, in fact, is arbitrary, at times ambiguous, its rules a direct product of the society where the language is spoken.

When there is no why, we are left with what is

There is no logical reason for burro in Spanish to be an animal (donkey) and in Italian, something you eat (butter); no reason for beer to be something you drink in English and an animal (bear) in Dutch; no logical reason for grad to be the German word for “degree” and the Bosnian word for “city.” This is what linguists mean when they say language is arbitrary. And this is why we cannot be judgmental about language, any language, or any part of language. A large share of this never-ending journey we have embarked on as interpreters and translators entails a commitment to learn what people mean when they use language to communicate.

The meaning has it

Oral communication can take place only when two people agree on the meaning of the sounds they put together. This is how we create meaning individually and this is how we understand meaning collectively. Only by paying attention to the idiosyncrasies of our source language speakers can we, as interpreters, find the true meaning of the message they are trying to convey and render it faithfully to that speaker’s intended listener.

Otherwise, meaning will be lost. Our mission will have failed. We will end up being like Bill in this movie: great guys, but our language—our rendition as interpreters—will not make any sense.

Feature photo by Nick Fewings and text photo by Fred Kearney on Unsplash.

5 thoughts on “About Lost and Found Meaning”