This is Part II of Javier Aparisi’s report on his Brazilian adventure.

Pedri, a family friend from my early years in São Paulo, accompanied me a few days later in our visits to the Barra Funda regional court in São Paulo. This judicial complex offered a different perspective on homicide trials.

While in the U.S. jury lists are compiled from voter registrations and driver licenses or state IDs, Brazilian jury pools usually consist of law school students or public servants picked by the chief judge of each court. They are based on a list of 21 candidates and each side can exercise five peremptory challenges during the selection process.

Pedri´s sister, Sandra Cristina, started participating in jury pools a few years ago. She worked at a local editorial company as a copy editor for legal publications and responded to a query asking for volunteers.

“Nobody is allowed to talk. That’s a huge mistake. We should be able to deliberate to ascertain the facts,” said Sandra before narrating an incident that seemed very similar to other documented cases of juror misbehavior in the U.S.

“The trial lasted more than 20 hours and I saw a juror dozing off. So, he didn’t hear half of the things that were said. That is unfair. You are deciding someone’s fate,” she added. 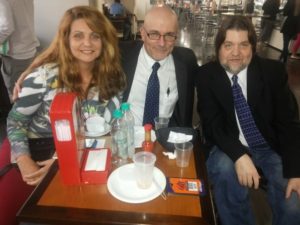 All of the Barra Funda cases took slightly less than three hours from the voir dire to the final verdict, but there have been instances in which jurors spent the night at the courthouse.

Everywhere I went I inquired about the use of interpreters. Several lawyers informed me that cases requiring the oral interpretation of a foreign language were very rare and, in those instances, a “sworn translator” [1] would be called in. A Ribeirão Preto attorney recalled a civil court dispute involving a Korean speaking businessman. The language barrier was overcome because the judge was the son of South Korean immigrants and took care of the interpreting. A retired administrative law clerk from Rio de Janeiro who wishes to remain anonymous said Brazilian law is vague on the matter of legal interpretation and has not changed for more than six decades.

In the hypothetical case of a non-Brazilian being tried for homicide by a jury,  “article 121 of the (Brazilian) penal code says that a foreign defendant shall have a private or court-appointed national lawyer who shall have to act as an interpreter or subcontract one (at their expense) if not able to communicate to his client the ongoing legal proceedings during the trial. I was not able to find references of the role of the interpreter in the minutiae of the criminal law literature nor his scope of work”, he added.

I came back from Brazil with the impression that foreign language interpreting is a rarity in their local courts, but surely this could be a topic for further investigation.

As I listened to the terms being used in Brazilian trials, I did clear a nagging doubt regarding the designation of parties in legal cases. Although U.S. English legal terminology includes the words complainant, accuser, petitioner, and pleader, the person bringing a lawsuit is mostly referred to as a plaintiff. Conversely, the accused or respondent will be identified as a defendant. In Portuguese, the nouns identifying plaintiffs and defendants vary according to whether the case is civil, administrative, or criminal. The proper term will also depend on the stage of the case. Thus, in a criminal case the plaintiff and defendant would be the requerente and requerido if the case is at the investigation phase; querelante and querelado in a criminal complaint, and recorrente and recorrido (appellant and appellee) in an appeal. There are many other variations for civil, administrative, and labor cases. Legal dictionaries for English-Portuguese fail to make these detailed distinctions.

I learned from my courtroom observations in Brazil that the challenges of legal interpreting go beyond mere linguistic concerns. Just looking at the differences in the jury systems for both countries, it is clear that even highly-educated Brazilian Portuguese speakers will have difficulties understanding legal proceedings in the U.S. because of the significant differences in proceedings and legal concepts used in these two countries.

Language professionals are expected to apply their best skills and judgment to preserve and faithfully convey the meaning of what is said in court. These differences in the client’s cultural frame of reference are an added challenge to the judiciary interpreter’s task. My Brazilian courtroom observations enhanced my legal vocabulary in Portuguese and reminded me, once more, that interpreters should convey meaning and not just words.

[1] Sworn Translator is the colloquial term used to identify the “Tradutor Público e Intérprete Comercial,” professionals who undergo a government exam and is officially appointed for the position. They are licensed to serve in their state of residence.

Javier Aparisi-Winthuysen began his professional career as a Portuguese and Spanish freelance interpreter with the U.S. Department of State in 1984, but a year later embarked on a 25-year hiatus into journalism with VOA, Reuters and the BBC World Service. He has worked as a freelance conference and legal interpreter in south Florida since 2013. He was born in Caracas, Venezuela, of Spanish parents, lived in São Paulo, Brazil, through his early teens before moving to Washington, D.C.