10 Feb That’s Not How You Say it in Gringa-Land!

Here’s the thing about my Spanish: I learned it from a book. When I enrolled in my first Spanish class, I didn’t even know how to ask someone, “How are you?” But I progressed quickly, with brilliant professors hailing from places like Peru, Costa Rica, Spain and Chile.

I regarded my teachers and my native-speaking classmates with envy. Their “r”s rolled without even trying and they understood all the political in-jokes while I struggled valiantly to hide my laughable ignorance of world geography and current events. Most importantly, I, the lowly gringa, would not dream of claiming the intuitive understanding that allowed them to announce, “Yes, that word just sounds right.”

So you’ll understand, then, that I trusted my professors and my classmates blindly when it came to terminology. I memorized the false cognates and as we moved into problem areas of legal translation/ court interpretation, I promised them I would never utter the words corte or ocupación (“court” and “occupation,” respectively). Medicina (the science of medicine) was not the same as medicamento (as in, “medicine,” the pill), and I would avoid saying probatoria (probation) and use of the passive voice altogether. Let’s not even discuss how to use the word sentencia (“sentence,” as in “what the judge passes”) correctly. 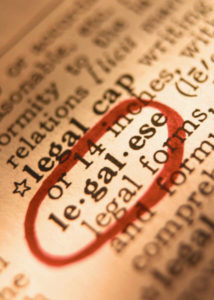 Imagine my surprise, then, when I began working in the professional world and met people who completely disagreed with those whom I had trusted to guide me on my linguistic journey. And these new acquaintances were native speakers too! They swore that corte was acceptable and that medicina was fine. Furthermore, Guatemalan lawyers were using the passive voices combined with false cognates, and these were learned professionals! My compass was suddenly off, and I had no Mexican grandmother or Cuban Papi to give me the final say.

I’ve since learned to grow a bit of gringa-confidence. I can actually make intuitive decisions about idiomatic expressions and grammar, and I can proofread your Spanish documents any day of the week, accents and all. Likewise, I’ve learned that the language varies from region to region and what is one country’s uneducated Gringa talking is another country’s respected Ph.D. I generally use wordreference.com as a starting point, and then I give Rae.es the final say. I trust my instincts, my research, and the input of my learned colleagues, but I take every “never say that ever” with a grain of salt.

And yet, the perfectionist flame burns deep in an interpreter and translator’s soul, and we all want the perfect equivalent. And sometimes, our terminology assurances are turned upside down. For years I’ve been saying ocupación is a false cognate (for the non-Spanish speakers among us, this is commonly viewed as a false cognate for the English word, “occupation.”. But the other day I looked it in the Diccionario de la lengua española , since I always tell my students not to just take my word on things and I wanted to practice what I preached.  The third definition was, and I quote, “3. f. Trabajo, empleo, oficio.” (http://dle.rae.es/?id=Qu0oRKT 2/9/17). In other words, ocupación means occupation, at least according to Spain’s Royal Academy.

What’s a gringa to do? I’m not quite sure. My go-to is to use the phrase that no-one will argue with. If anyone has a problem with it, I opt for something more “socially acceptable,” if you will. But does that mean that the other way is wrong? If you can find it in a well-respected dictionary, and there’s no caveat like Americanism that precedes it, I don’t think so.

What about you? What are the words and phrases, in Spanish or in any other language, that you think are absolute no-nos, or which you grew up using but have since been told are wrong?

How do you say it, in Gringa-Land or anywhere else?

20 thoughts on “That’s Not How You Say it in Gringa-Land!”