I’ve been thinking about the lists of wonderful gifts children wish for when the holiday season rolls around, and what I would want on my list if I could have any of those gifts delivered, as if by magic.

For one thing, I would want to have a prodigious memory so that my consecutive renditions were always effortlessly flawless. I would never have to worry about forgetting a term and would learn new ones in the blink of an eye, so I would have the most extensive vocabulary any interpreter could ever wish for.

With my extraordinary memory, I would learn about any subject matter, and all the special terminology related to that subject, without ever having to create a glossary. I would never have to worry about studying before a trial, either. It would all be there, ready for me to recall any time I wanted to. 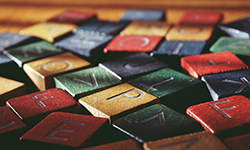 I would also wish for the gift of learning new languages with ease, so I could speak and read and understand all those languages I always wanted to learn and for one reason or another never did. Oh, I confess I started to learn French at different points in my life, and Portuguese too, but I never got beyond the most basic lessons. I love not only the sounds of the different vowels and consonants, but also the cadences that give each language its unique identity. I would learn them all, if I could: Japanese, Quechua, Tagalog, German, Arabic, Italian… if I could have that gift.

Perhaps lower on the list but still particularly important would be a floor-to-ceiling library of books to read just for the pleasure of reading and the time to actually sit down and relax with a book in my hands with nothing else to think or worry about. I would want all the classics and all the young new writers I have never even heard of. I would want to read the ones in English and the ones in other languages (yes, the new languages I am going to be learning!). I like to read fiction, so this is not going to be a “learning” library; this is going to be my leisure library, my escape library, my place to “suspend disbelief” and dive head-first into the myriad worlds created by the writers.

Of course, this wish list is my grown-up version of a kid’s “Letter to Santa” and both me and the kid have about the same chances of getting what’s on that list. But it’s always fun to dream.