I pulled up to the National Guard’s State Emergency Operations Center on Monday April 20th, 2020 unsure of what to expect on my first day interpreting a COVID-19 press briefing by Iowa Governor Kim Reynolds.

I passed through a sign-in desk and had my temperature scanned before being led to the auditorium where the briefing would be held. Members of the media were seated throughout the rows of seats in front of a podium, masked and spread out. I’d devoted a lot of time the weekend before to compiling a glossary of COVID-19 terms in English and Spanish with my interpreting partner Vanessa Marcano-Kelly. We had watched videos of previous press conferences to get a feel for the Governor’s speaking style and the conferences’ format. We felt ready as ready as we could be in this new setting, keenly aware of the importance of conveying this information accurately to Iowa’s Spanish-speaking population. We set up our work area and watched the monitor in front of us, waiting to start. Vanessa and I would go on to interpret over 50 live on-air events in 2020, but our task that day was just to make it through the first 35-minute press briefing.

The Governor began, “Today we had 257 new positive cases for a total of 3,159 positive cases…” and we interpreted like we had done many times before (just never on live television). 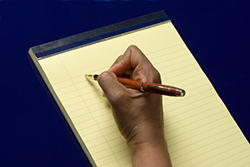 My interpreting background is centered around work in legal settings with some experience in conference interpreting. I had never really listened to or analyzed my work (you really can’t in court) and breaking down my performance in the first few press conferences was a sobering experience. Even after a few press conferences when I’d gotten more comfortable with the terminology, I heard jerky delivery with either pauses or drawn-out syllables at times. I knew I had to do better and set out to adapt to this new challenge.

I practiced interpreting older press conferences with the specific goal of lengthening my décalage to allow me to eliminate speakers´ false starts and repetitions and to distill their message to its key points, allowing me to maintain a steadier flow of speech. I got some great advice on this point in the form of a question from my colleague and mentor Alex Gualino. Drawing on his experience as both a top-level conference interpreter and a trained actor, he asked, If I were the producer of this show, what would I most want from you as my interpreter? After a little reflection I came upon the answer: a pleasant listening experience, something that viewers would want to stay tuned in to. I can try to capture every idea the speaker is sharing, but what good is that if I have to talk too fast and sound unpleasant in the process?

Learning from each other

I´ve been truly fortunate to be able to connect and reflect with other interpreters who are also interpreting COVID briefings for their state´s governors. Naomi Todd-Reyes from New Mexico said, “I was surprised at how well the skills acquired in court interpreting transferred to interpreting for press conferences, as well as how poorly some of those skills transferred and had to be adjusted for this new setting and purpose.”

We hope you’ll join us at NAJIT´s annual conference for our panel discussion, “From the Courtroom to the Press Room: Interpreting Elected Officials’ Health Briefings,” where interpreter teams from Iowa, New Mexico and North Carolina will reflect on how we all confronted and adapted to this new challenge. In the meantime, we would love to hear any comments or questions you may have below. 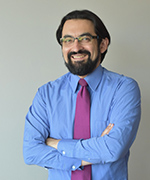 Ernest Niño-Murcia is a freelance legal interpreter and translator based in Des Moines, Iowa. He received a B.A. in Anthro-Linguistics from Brown University. As a state and federally certified court interpreter, he has interpreted legal proceedings and prepared translations, transcriptions and expert witness reports/testimony for clients in the private and public sectors. He is a member of the Iowa Judicial Branch ́s Language Access in the Courts Committee. Outside of court, he has interpreted for public figures such as House Speaker Newt Gingrich and Senators Bernie Sanders and Elizabeth Warren. He worked with Iowa PBS providing live interpretation for broadcasts of Governor Kim Reynolds’ daily press briefings on the COVID-19 crisis. Additionally, Ernest is a Jeopardy! Champion (2012), whose greatest achievement on the show was beating an attorney to the buzzer to answer “co-defendant” in the “11 letter words” category.