“Who is ‘she’?” That was the question Louise*, the court reporter, had been subpoenaed to answer. And she was not looking forward to it.

The day “she” entered Louise’s life had started like any other day. The assignment didn’t seem to be anything special. Sometimes routine is good.

It had been an arrest and a bilingual police officer had been the interpreter.  The trouble was not the police officer’s command of the language. No. The problem was his interpreting technique – or rather, lack thereof. When rendering the deponent’s replies to the court reporter, the well-intentioned police officer started all his statements with “She said” and that is how they were entered into the record. Routine? Not a chance.

The problem? He had introduced another character into the scene. We already had the 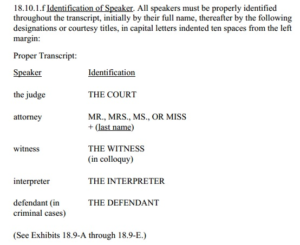 lawyer, the deponent, the interpreter, the court reporter, and now “She”. As taken, the records were confusing and must be clarified. Louise took pride in the quality of her work, so she was not happy. Having police officers provide interpreting services is not in itself a problem. There are, however, two issues that come to mind: (1) conflict of interest and (2) lack of training.The conflict of interest issue is clear cut. Lack of training, however, is not so obvious. After all, the officer knew the language well — what else is there to it? Much, Louise would say.

Every deposition in which one of the parties requires an interpreter involves a minimum of three people: the lawyer, the deponent and the interpreter. The court reporter labels her entries accordingly. The interpreter takes on two roles: he speaks for the deponent and at times may speak for him/herself. The odd thing is that when speaking for the deponent, interpreters speak in the first person, and their statements are taken as if spoken by the deponent. But when speaking for themselves, interpreters assume the third person and label themselves as they speak: “The interpreter would like to ask for clarification.” This helps court reporters keep the record clean and easy to read.On the record, on that fateful day, every response by the deponent conveyed to the court reporter by the officer was taken down as: Deponent: “She said it was three pm.” And now the judge needed to know who the deponent had been referring to during deposition.Yes, that day Louise would have done anything for a dose of routine.

* Just another made up name