17 Mar Sworn translation in France and the United States: What are the differences?

This week we welcome Cultures Connection as a guest author. They publish a blog and, after reading some of our posts, asked to share some of their good writing with our readers. Would you like to see your post on our pages? Please send a note to our Editor.

TNO Disclaimer: Acceptance of material for publication and subsequent publication does not constitute an endorsement on the part of NAJIT.

Sworn translation is little-known but necessary and mandatory in certain contexts. For example, if a family moves to another country, and one of its members passes away, the translation of the deceased’s will must be carried out according to the rules of the host country in order to have legal value. In fact, the translation of legal documents such as passports, diplomas, and birth or death certificates should be carried out by a sworn translator (in certain countries) so that the documents are legally valid.

Though any translation can be certified, this step is obligatory for legal documents. The idea is to make a translation, carried out by an expert, official. This type of service concerns the private sector as well as the public sector. This is the case, for example, for an individual hoping to become an American citizen, who will need to have certain documents that are required by immigration translated. Alternatively, consider a company that wishes to establish a subsidiary abroad. The company must call on a sworn translator to translate the required legal documents and have them certified so that they have legal value in the country concerned. But beware, there are major differences between countries. While some countries, like France, offer a list of sworn translators listed at the national level, others, like the United States, require that the translation be signed in the presence of a third party. In any case, the translator capable of translating official documents is a professional who has extensive knowledge of the legal systems of the countries of his or her language combination.

France versus the United States

In France, a translator becomes sworn after having filed an application to the Court of Appeals (Cour d’Appel in France) in the area where he or she works. The translator is then added to the court’s official lists. Next, the translator is subject to a character investigation and must prove that his or her criminal record is clean. Beware, this does not mean that all applications are approved. Actually, only a limited number of translators will be selected. However, the others may reapply as many times as they wish. If the application is accepted, the translator must take an oath before th 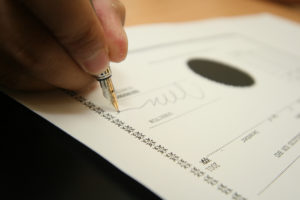 e Regional Court (Tribunal de grand instance, or TGI, in France). Once this step is completed, the translator begins a probationary period of three years, and after five years, may request to be added to the national list of sworn translators.

This expert translator may now affix his seal and signature to translated official documents in order to certify that the translation is faithful to and consistent with the source document.There are two levels of formalization in France: legalization and apostille. Legalization, performed by a town hall, notary, or Chamber of Commerce, verifies the identity of the expert translator and authenticates the translator’s signature. In the case of the apostille, the State guarantees the work performed.

In the United States, the system is completely different. Documents are certified by their translator, who then signs a declaration of accuracy in the presence of a notary; the notary certifies that the signature on the declaration is that of the translator in question. This is a way of ensuring the validity of the document. The American Translators Association (ATA) is a recognized organization that offers competency tests to translators who wish to take them, which gives a kind of quality guarantee to the client. However, it should be noted that the ATA only offers tests for certain language pairs, and the pass rate of these exams does not exceed 20%. This test is therefore only available to professional and experienced translators. Note that this certifies the translators, and not their translations. The document must pass through the hands of a notary to have legal value.

Although the process of obtaining the title of sworn translator varies by country, this area of translation proves to be delicate in both France and the United States. In fact, mistakes made in the translation of a legal document may have serious or even catastrophic consequences. Of course, certifications exist in many countries, but this is not a guarantee of quality — it is also necessary to be very careful about this kind of translation, especially as they are generally confidential.

This type of translation, while little-known, is necessary if you want your document to have legal value. And while the processes for certification are different in different countries, it will always be necessary to enlist a specialist for this type of service!

12 thoughts on “Sworn translation in France and the United States: What are the differences?”