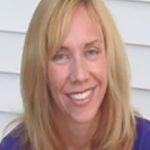 Samantha Cayron’s 2017 publication, Manual de traducción jurada de documentos notariales en materia de sucesiones entre los sistemas jurídicos francés y español: La Traductología Jurídica aplicada a la práctica (Handbook of Legal Translation of Notarial Deeds of Succession in the French and Spanish Legal Systems: Legal Translation Studies Applied to Practice) provides an in-depth study of notarial deeds drafted in the legal systems of Spain and France. The author applies a comparative approach based on functionalist theory within the broader context of legal translation, and more specifically, in the specialized context of notarial deeds of succession. This method allows her to highlight the role of the translator as mediator, not only between languages, but between cultures, contexts, and legal systems. This pragmatic approach allows translators of these types of deeds to produce a target text that is equivalent in function to the source text. Cayron includes concrete examples culled from actual sources from both the French and Spanish legal systems to illustrate the benefits and limitations of the comparative approach and to provide a framework for applying the same techniques to other texts. Although highly specific to content (notarial deeds of succession) and context (the French and Spanish legal systems), this manual offers several techniques that are applicable to other contexts and language pairs.[1] 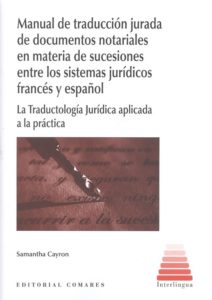 Cayron’s Manual is her doctoral dissertation, and the structure of the book corresponds to the common structure of such studies. The author begins with a review of the literature, an explanation of her theoretical approach, and a description of her research method. She explains in detail the various types of deeds that comprise the greater corpus of notarial deeds in the legal systems of France and Spain, as well as her selection process for the documents included in her study. Cayron also specifies the measures she has taken to assure the confidentiality of those individuals whose notarial deeds serve as examples in her study.

From this theoretical and methodological foundation, Cayron proceeds to provide the judicial context for Spain, France, and her native Mexico, since she does include a selection of documents from that Latin American country. This contextualization is essential to a true and accurate translation. The comparative charts in this section are useful in illustrating the parallels between the laws of France, Spain, and Mexico City the author illustrates the importance of situating a text within its legal context both in the source and target languages with an example of the subtle differences between terms related to heirs apparent and legatees in the French and Spanish legal systems. She also explores inheritance laws and the regulations that frame the notary’s work in the countries of study, along with the general process and documents involved in questions of succession.

Cayron dedicates a chapter to an in-depth exploration of the public instrument, highlighting aspects pertinent to the translation of notarial deeds of succession. She outlines the particular elements of style, formatting, and language of these deeds, along with other unique features, such as the type of paper used, official seal, signature, and numbering system. She also identifies their various conventions through sample texts, illustrating and expanding upon them in the body of the chapter.

The fourth chapter presents the primary focus of the book in which Cayron applies her theory and method to the translation of a notarial deed (French to Spanish). This lengthy chapter traces the translation process, providing side-by-side charts to present excerpts of the source text and its corresponding translation, along with in-depth comments that underscore the author’s decision-making process during the translation. As part of this process, the author compares inheritance laws from the target language system with that of the source, highlighting them with different colors of ink. This visual presentation is particularly useful in identifying similarities. As the author notes, this type of comparative analysis allows the translator to generate a substantial portion of the target text by studying the existing laws. This approach is applicable to other language pairs and legal contexts.

Cayron’s Manual is highly specific both in its language pair and its treatment of notarial deeds of succession. Readers must have a fairly sophisticated reading knowledge of Spanish to understand the text; Spanish translations of French terms are included. Despite these drawbacks, the study is based on sound theory and methodology, and it includes multiple examples in a single text. Her comparative approach to studying inheritance laws in the source and target language systems is applicable to other areas of legal translation. Cayron’s study is recommended for legal translators of deeds of succession, or to serve as a roadmap for translating other legal documents.

[1] Although this book is written in Spanish with numerous references to French translations, the author of this book review has intentionally refrained from including specific terms in Spanish and/or French in an effort to reach Proteus’s diverse audience who work in a variety of language pairs.

[Dr. Julie A. Sellers, a specialist in adult second-language acquisition and in Latin American popular culture and identity, is an Associate Professor of World and Classical Languages and Cultures (Spanish) at Benedictine College, in Atchison, Kansas, and she is a federally certified court interpreter (English<>Spanish). Dr. Sellers has published on language acquisition and interpreting skills and advocacy in a variety of publications, such as The Language Educator, Proteus, and The Wyoming Lawyer. She published her third book, The Modern Bachateros: 27 Interviews in 2017 (McFarland).]