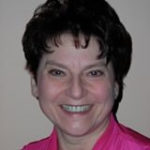 That’s the official NAJIT shirt that made its debut at the 2016 Annual Meeting and Educational Conference, and both the shirt and the conference were a hit! The shirt, in navy or gray, was sold along with a number of other items, including keychains and travel cups as part of a fundraiser. for the development of our new website. (There are still some items left, so hurry, before they’re all gone and proudly show the world who you are!)

I have attended every conference but one since I joined NAJIT in 1999. (I missed the year my son graduated from college—some things must take precedence.) In most of those years, I had responsibilities of one kind or another to make the conference the best it could be. It is a complex task, and the planners are usually more likely to hear about what wasn’t right than what was. It’s the nature of the beast, rather like housework. No one notices everything good that was done, but rather what was not. So I want to take this opportunity to congratulate the entire Conference Committee, our Executive Director and Administrator, Rob and Susan Cruz, TAJIT, and every other volunteer who helped to make this a resoundingly successful conference. (And a particularly enjoyable one for me, as I had no responsibility whatsoever in its planning and execution.)

This year was notable in a number of ways: after 38 years, NAJIT has rolled out a new logo that is clean-cut, colorful and eye-catching and will help to “brand” our organization with a modern graphic that is self-explanatory. A lot of research went into its design, and the Board hopes that you are as excited about it as they are.

If the number of attendees says anything, this was the most popular conference in many years, with 157 attending the Friday pre-conference sessions and 262 at the main conference. The structuring of sessions was somewhat different this year, based on feedback from previous conference attendees; there were fewer tracks, but longer sessions, a change designed to allow speakers to go into greater depth. All told, there were 39 sessions, comprising two 6-hour and eight 3-hour ones on Friday, and fifteen 1-hour and 14 1.5-hour ones on Saturday and Sunday. Not to mention the 31 speakers and 9 panelists who presented on a wide variety of topics, from skill-building to cultural conflicts among legal concepts to sessions on maintaining our voices, hearing and general health in order keep practicing our profession at the highest level. And we even “threw a few mothers” in a session designed to desensitize interpreters to cursing in the course of our interpretations. Additionally, there were sessions concerning Immigration Court, implementation of the California Language Access Plan, Federal Court updates, business and technology issues and deaf and medical interpreting. There was something for everyone, and the hardest part was choosing which sessions to attend.

Three Scholars were honored this year, and it was gratifying to have an overabundance of members volunteering to be mentors.
Click HERE to read about our scholars and see them with their awards.

A heartfelt THANK YOU to everyone who took the time to speak and network with, and nurture our next generation. Special thanks to the following members who were official mentors:

And don’t forget to spread the word about the Scholars Program to people you know working in interpreter training programs.

Our Keynote Speaker, Michael Mulé, an attorney in the Federal Coordination and Compliance Section of the Civil Rights Division at the DOJ, has focused throughout his career on improving access to programs, services and information for limited English proficient individuals. He updated us on compliance with Title VI of the Civil Rights Act of 1964 and Executive Order 13166, and gave us hope that progress, albeit slow, is being made across the country. It’s good to know that there are dedicated people in government who actually “get it.” 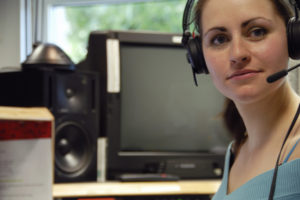 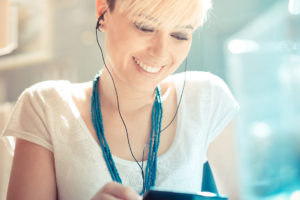 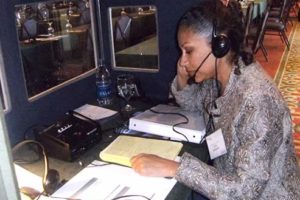 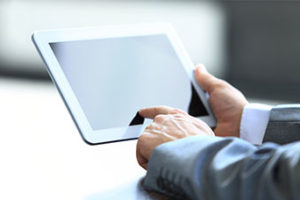 I must say that the business meeting was the most succinct that I can remember in all the years that I have attended the conference, and the Town Hall Meeting on Sunday was both inclusive and productive. Be sure to check out Agustín de la Mora’s article on his call to arms, elsewhere in this issue.

But don’t think that it was “all work and no play!” On Friday evening, the Texas Association of Judiciary Interpreters and Translators (TAJIT) hosted a fabulous mixer at Casa del Río on the beautiful San Antonio Riverwalk. Colorful umbrellas and twinkling lights along the water, and Mariachi music set the scene for the renewal of friendships and making of new ones. And the Saturday evening cocktail reception at the hotel lasted well beyond the anticipated closing time, with good food and drink and animated conversations that just didn’t want to end.

Of course, all good things do end. Sunday held a lot of hugs, goodbyes and exchanges of contact information, solidifying and expanding the web of supportive colleagues throughout the country. But never fear: we’ll meet up again next May in Washington, DC, and we have a fabulous rate for the hotel. So start saving your pennies, and I look forward to seeing you there!

[Rosemary W. Dann, Esq. is former Chair of the Board of NAJIT and Editor-in-Chief of Proteus and has served on numerous committees, including Advocacy, Nominations, Conference, and Bench and Bar. She has served as a freelance interpreter in the courts of NH, MA and FL, and is now officially “retired.” She is currently pursuing a degree in Theatre Arts at Paradise Valley Community College in Phoenix, AZ, her most recent home.]